Usually I save bug storytime till it's for real summer, but not this year! For my toddler storytime today, I flannelized and Brown-Bear-ized some cute little bugs. By Brown-Bear-ize I mean that I just replaced the animals in the beloved Brown Bear, Brown Bear, What Do You See? with bugs of various colors. I got the idea from the post at Miss Sarah's Storytime about transportation, who was originally inspired by a Flannel Friday post at Valley Storytime

I drew the bug shapes freehand because I couldn't find templates that we're simple enough and all the same style. Basically I just google-imaged the different bugs and used what I found for inspiration. I was trying to keep the designs simple without being too cartoon-y, but some of my storytime friends and their grownups had trouble identifying the bugs, so I might redesign a few. The blue beetle and the green inch worm were the most confusing (they thought the worm was a snake...), but not many people picked up on the firefly either. So, all that to say, feel free to use this as a loose inspiration for a fun story that everyone can help tell.

To tell the story, I first explained that this was based on Brown Bear, Brown Bear, but it was called Red Ladybug, Red Ladybug since it's about bugs. Together we say "Red ladybug, red ladybug, what do you see?" Then I pull out the next bug and we talk about what it is before saying, "I see a blue beetle looking at me." We continue on until the last bug who says "I see lots of kids looking at me!" So, you know, nothing mind-blowing, but the kids and parents enjoyed it. I used it as my early literacy tip, actually, and suggested that parents encourage their child to make up their own "Brown Bear" story with other animals or people as a way to promote narrative skills and phonological awareness.

For your information, here are the bugs I used: red ladybug, blue beetle, green inchworm, purple butterfly, yellow spider, and black firefly. I created them with felt and puffy paint. 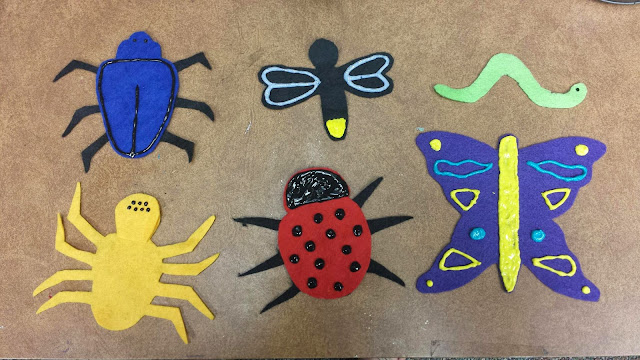 Forgot to add this earlier, but Flannel Friday is being hosted by the lovely ladies at Jbrary! Go check it out!
Posted by Unknown at 6:30 PM